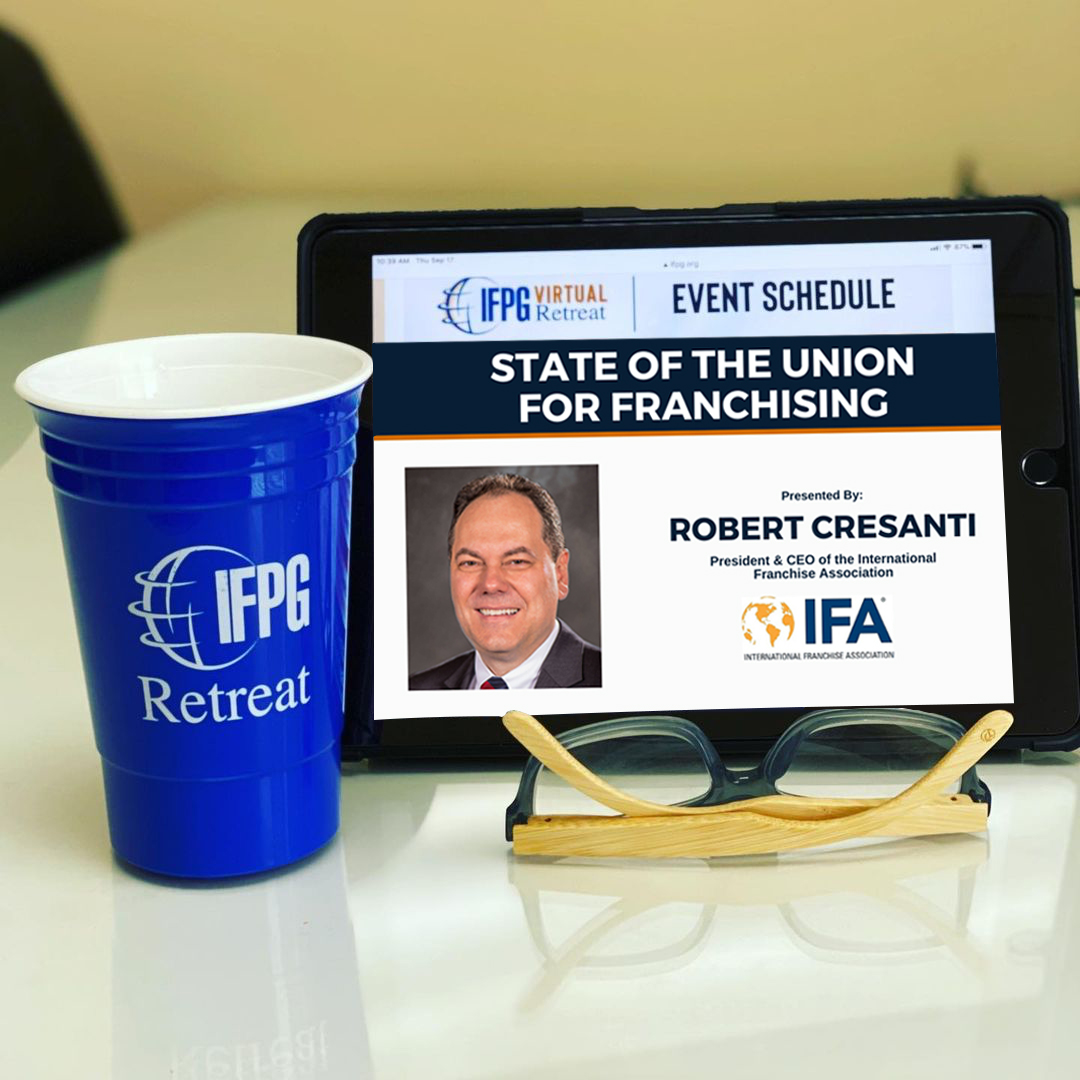 Robert Cresanti, President and Chief Executive Officer of the International Franchise Association (IFA), will be the guest speaker at the International Franchise Professional Group’s (IFPG) virtual retreat next week. His talk entitled “The State of the Union for Franchising,” is scheduled for the second day of the broker network’s three-day virtual conference, which will take place October 5th,6th & 7th.

In his address, Cresanti will share his insights on the pandemic’s impact on franchising and will talk about the future of the industry. Following his address will be a lively Q&A session where IFPG members will have an opportunity to ask questions. Since the pandemic hit, the IFA has been working tirelessly and continuously rallying the franchise community in support of the industry. A visionary leader, Cresanti is passionate about what he does. “If you don’t act, you lose your right to complain later,” Cresanti says.

Don Daszkowski, CEO and founder of IFPG is thrilled to have Cresanti share his insights with his members. “We are so lucky to have Mr. Cresanti take the time to talk with us, especially at this pivotal time,” he says. “Through the IFA, Mr. Cresanti has made a significant impact on our industry. Franchise owners make up a large percentage of small businesses in this country. The IFA gives them a voice,” continues Daszkowski.

Designed as an add-on opportunity to their in-person event scheduled to take place in Florida this January, IFPG’s virtual retreat offers another way for its members to connect. Although Daszkowski isn’t planning the virtual conference to replace the in-person event, he says the on-line version will have some of the same elements, such as speaker presentations, and opportunities for members to network and interact live. “We are constantly looking for ways to add value for our members. As business owners, we’ve all been through a lot these past six months, so we’re taking every opportunity to come together and reflect,” he says.

IFA explains presidential candidate's positions on franchise business-related policies
Dollars to donuts: Dunkin’ Brands might have a new owner
Coronavirus Relief negotiations have stalled
This franchise family is making a difference for aspiring business owners
Senate to Vote on PPP Extension Next Week
This former engineer finds meaningful work as a franchise owner
Are virtual networking events here to stay?
Franchise experts to discuss why a sense of purpose is so important to franchise seekers
The inventive crew behind REP’M Group is helping franchisors take flight
Robert Cresanti to Deliver State of the Union for Franchising at IFPG's Virtual Retreat
More

How to Build an SEO-Friendly Website for a Franchise
This franchise family is making a difference for aspiring business owners
Email Marketing Best Practices for Franchise Marketers: 8 Essential Steps
Franchise experts to discuss why a sense of purpose is so important to franchise seekers
The inventive crew behind REP’M Group is helping franchisors take flight
Once the dust settles: What to ask franchisors in the post-pandemic environment
How to Optimize Your Site for Voice Search
Getting involved: Ways franchisees can be seen as leaders in their local communities
5 Steps to Take When a Franchisee Closes Business Unexpectedly
Common Franchisee Mistakes—and How to Avoid Them
More

IFA explains presidential candidate's positions on franchise business-related policies
Coronavirus Relief negotiations have stalled
This franchise family is making a difference for aspiring business owners
Senate to Vote on PPP Extension Next Week
This former engineer finds meaningful work as a franchise owner
Franchise experts to discuss why a sense of purpose is so important to franchise seekers
Robert Cresanti to Deliver State of the Union for Franchising at IFPG's Virtual Retreat
The new mom & pops: franchising has put these families on a fast track to business ownership
This female franchisee found the perfect business in an industry dominated by men
IFPG is named the number-one franchise broker network for the second year in a row
More